The Diagnostic Assessment Program for Juvenile Bipolar Disorder was designed for use in clinical and research settings to screen for bipolar disorder in children from parent and child reports. 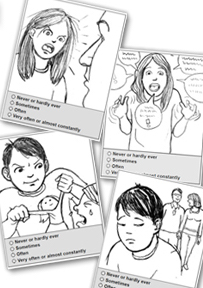 Further, it allows that information to be reported in degrees of severity rather than simply “present” or “absent”.

The development of the CBQ is important as it provides an efficient screening tool that is both reliable and easy to use.

Follow this link to request The Child Bipolar Questionnaire.

The Child Bipolar Questionnaire (CBQ) is a reliable and sensitive diagnostic indicator for early onset bipolar disorder.
FIND OUT MORE


The Jeannie and Jeffrey Illustrated Interview for Children (J/J) is the pediatric companion instrument to the CBQ.
FIND OUT MORE

Why Is It So Difficult to Diagnose Bipolar Disorder in Children?
READ MORE


Read about the development of a new perspective on the diagnosis of pediatric bipolar disorder.
READ MORE